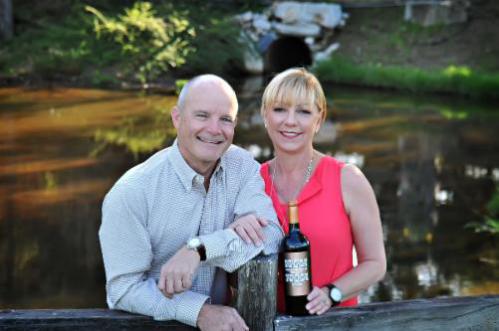 It began as a landscaping idea. Plant 10 vines alongside our home in Rancho Bernardo. We bought the Zinfandel plants in Sonoma County, housed them in a hotel during a trade show in San Francisco, and planted in the spring of 2004. A year later, folks were saying "what are you going to do with those grapes?" An interest in enjoying wine turned into a passion for making it, and after procuring equipment, building refrigerated storage and eventually land for a vineyard, this "slippery slope" became the name for our amateur label.

Along the way, Ray took classes at a local community college and on-line from UC Davis, became active in the local home winemaking club, and scored some nice accolades from county and state winemaking competitions. Jeannine became a winemaker in her own right, producing a gold medal winning vintage.  And more recently, Jeannine has passed the rigorous test to become a Level 1 Sommelier in the Court of Masters.

In 2007 we acquired our property in Highland Valley and in 2009 began construction on the winery and vineyard. Grapes have been grown in this valley for over a hundred years. As a nod to that long history, we named our vineyard/winery Highland Valley Vineyards and built the winery in 1920's craftsman-style design.

In addition to winemakers, we are now winegrape farmers, completing the path from earth to bottle. We utilize sustainable farming techniques to minimize our impact on the land and maximize the quality of our fruit.